No matter how I walked, Mam was still unsure.

“Ye’ll be fine on the ferry, Biddy, it’s being allowed on that big ship I’m afraid of.”

I tried to tell her that I’d be right, but she wasn’t having it. Even Susie, her favourite, couldn’t convince her.

Round and round the table I walked, then, to keep her happy, up the lane a way. Mam first folded her arms and then smoothed her apron, as she was wont to do when worried.

“Mam, Susie will be with me – she’ll stand in front of me.” Though even I was having doubts now.

Our cousin was in charge at Southampton. Susie said he’d see us right and make sure I could board. Mam was still muttering. It had been six years since I fell off the haystack and I was as good as ever, almost.

At least I didn’t have time to worry about how much I’d miss everyone. Mam was still trying to fit more into my bag. “It’s alright, lassie, just a few shamrocks to put on Jack’s grave, ’tis the least you can do.”

“Away with ye now, ye Dad has Paddy Maloney’s pony and trap, he’ll get ye to the ferry. Mind how ye go.”

No last hugs, no tears from Mam, after all, we weren’t the first to leave in these hard times.

Trying not to limp, I bade Mam goodbye, knowing t’would be the last time. My aching heart felt far worse than my foot.

Burning wood, with just a hint of smoke.. the kettle bubbles on the hob.

My Aunt lets me strip the leaves from the fresh basil, and its clean fragrance lingers on my fingers.

Nona rarely mentions Kythera, except when preparing traditional recipes as she is now. I start to ask questions, I always have questions. My Aunt shakes her head as if to say ‘ ssh, let her talk’. Nona’s broken English fascinates me.

Each piece the same size as the last, so the salsa cooks evenly. Nona speaks in Greek, Aunt laughs, they are happy.

The rhythm of the cutting continues, soft chop, chop against the boards.

It’s a large kitchen. A gentle breeze teases the white lace curtain. Pots are bubbling, each stirring releases that exotic spicy fragrance. Before long, the jars are filled and sealed and set aside to cool.

The little that is left over is poured into bowls. We sit, tired, but content, dipping chunks of that morning’s freshly baked bread into the salsa.

I hope Heaven has a kitchen. 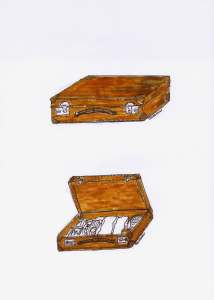 His life in a suitcase, now doubling as a seat. Other villagers jostled around him, anxious to board for Port Said,  then embark on the Grosser Kurfurst* bound for Australia. 1904 saw many leaving Kythera, longing for a new life. Though he’d been an Evzone #, he still had to sell his small land plot to feed his parents and four siblings.

He touched his ticket again, safe. After arriving in Fremantle, he sailed on to Sydney to a promised job. Sleeping on the cafe floor after long, tiring days made him more determined to learn from his Kytherian compatriot. With little money in his pocket, he moved on to Grafton, soon becoming a partner in the Marble Bar Cafe.

His meticulous note keeping documented his life, including first checking land near Casino in 1909. He and his newly arrived wife, now with child, walked to this land in Whiporee, in 1910…the first of nine children, a son,  born there in the bush.

Touching that same suitcase, I can’t help but feel the courage, determination, persistence and love of family, shown by my paternal grandfather, as I continue to unpack the story of his life.

# Evzone -guard at Greek Palace, chosen from those considered to be ‘perfect specimens of youth’.